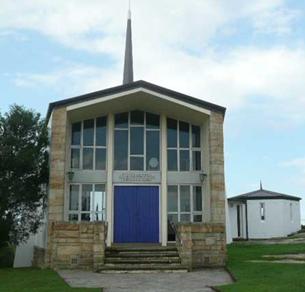 To build the Chapel, donations were sought. Letters

were dispatched to all parts of the world, and hundreds

and hundreds of people from all walks of life contributed.

The Chapel was solely financed by these donations and

The Foundation-stone of the Chapel was laid on April 30,

anonymous. His father was a Naval rating who lost his life

in service at sea in World War II, three months before his son was born.

No finer location could be imaged for a Naval Chapel than the seaward brink of South Head - one of the most impressive headlands to be found on any coastline around the globe. The entire width of the building is an immense window of glare-resisting glass which frames-up a magnificent seascape capturing the side harbour entrance, the massive rocky bulk of North Head, and a side sweep of open ocean. The Roll of Honour records the names of those whom we are bidden to remember, in whose memory this place of worship was built. The Chapel is a place of memory and of worship, rising from the very soil of Australia with stone quarried nearby, and within, furnished and enriched by wood and stone and other gifts from many lands and holy places.

The altar consists of a variety of stones from historic and famous cathedrals and chapels all over the world. The stones are symbolic of the universality of the Christian faith. Among the oldest stones are a group of six thick flagstones which were taken from the ancient Blacader Crypt in St. Mungo's Cathedral in Glasgow. Other stones incorporated in the altar are almost as venerable and have fascinating historic associations.

H.R.H. Phillip, Duke of Edinburgh, presented a Prayer Book for use in the Chapel, and the British and Foreign Bible Society gave a large Bible. One of the walls has two inscribed bronze plaques sent by two Royal Navy establishments, HMS Vernon and HMS Dryad, at Portsmouth.
There is symbolic union between the Church and the Naval Service, and in particular the establishment, HMAS WATSON. The establishment first came into being early in World War II, with the formation of a radar school. Subsequently, it was commissioned as HMAS WATSON, the name being derived from its location, Watson's Bay.

It is fitting that tribute be paid to Rear-Admiral George Oldham, RAN and Chaplain James Trainer, RAN whose inspiration was responsible for the HMAS WATSON Memorial Chapel, also known as the Chapel of St. George the Martyr.